What’s the difference between weep and non-weep spray guns?

Weep style guns are designed with an orifice cut out of the bottom that allows a small amount of water to continuously flow through the lines when the spray gun is not being used. A small trickle of water constantly escapes from the gun.

In what circumstances should you use a weep gun?

Car wash operators use weep guns if their car wash is located in an area with freezing climates. By allowing a constant low-pressure flow of water through the system and gun, freezing is avoided. Weep guns allow operators to stave off costly equipment damage caused by freezing.

Weep guns also offer a way to release pressure within a fluid system. Powerful, high-pressure pumps and equipment must allow pressure to escape, otherwise they can be harmed by the intense buildup. The most obvious way to release pressure is through the spray gun when used by a customer or employee. With the chance that a gun won’t be used for significant gaps of time during low volume hours, unloaders and regulator valves release pressure when the system reaches a certain level.

Weep guns essentially act as a pressure regulation device because water/pressure constantly has a place to escape. Monitor levels with pressure gauges to make sure that enough pressure is escaping to keep your system safe. Weep guns can work as an unloader, but they might not be as precise and reliable as a true unloader/regulator designed specifically for that purpose.

In what circumstances should you use a non-weep gun?

It’s typical to use non-weep guns in climates where freezing is not an issue.  Without the fear of freezing, a regular flow of water can be unnecessary, wasteful, and costly. If you’re worried about pressure buildup, it’s more prudent to use accessories like unloaders and pressure regulators to protect your pump. This way, you don’t have to waste any water.

Sometimes, people will attempt to use self-serve car wash bays for free. They do this by applying excess foam brush soap from a paying customer’s wash and then using a weep gun to rinse the soap from their vehicle. This is an example of why you shouldn’t use a weep gun unless you’re confident that the benefits will outweigh the potential problems.

What is a dump gun?

A dump gun operates in a similar fashion to a regular weep gun in that a low-pressure flow of excess water/pressure escapes when the trigger releases. The difference with a dump gun is that the flow of water diverts to a large orifice at the end of a wand, rather than an orifice that’s on the gun itself. The typical dump gun design has one small inner lance for high-pressure flow inside a larger lance for low-pressure flow. Some dump guns have a side-by-side lance design.

Using a dump gun eliminates the need for an unloader or regulator. It also prevents freezing, much like a weep gun.

Should I be concerned about weep guns if I’m a professional pressure washer?

Car washes are the primary users of weep guns. Pressure washing businesses use portable systems that they shut off with some amount of regularity, while self-serve car washes are in operation for extended -often unsupervised- periods. Due to that difference, car washes are more prone to damage from freezing and dangerous pressure spikes. 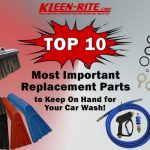 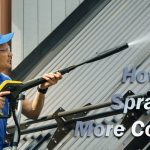 How To Make Spray Gun Use More Comfortable